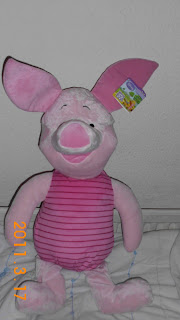 The other day I won a giant Piglet in an arcade and it got me thinking how winning it was much like getting published.  Now, please bear in mind that I'm not published so what I say about the feelings of being published etc are what I a) imagine it to be like and b) have read it's like by published writers.

Anyway, I have coveted this Piglet for months.  It has been sitting there in the arcade machine tormenting me everytime I go past.  But I never bothered trying.  I mean, I know those machines are complete rip-offs, as well as addictive, so I try to stay well away from them.

But the other day, after going to the cinema (review coming tomorrow!) and for dinner/drinks as my birthday celebration, we ended up in the arcade.  And I figured it was a fun way to spend some money as I was with my friends and it was more a social thing.

First of all I tried and tried and tried to pick up a small Piglet from the Winnie-the-Pooh machine.  I had to give that up quite quickly as the grabber stopped working.  So I thought to myself, why not give the giant Piglet a go?  Imagine my surprise and delight when I won it after only four turns!  Yes, you read that right.

And this is where it gets a bit like being published/getting an agent etc.  I had never won the Piglet beforehand simply because I had never tried.  I have to say, if you aren't submitting, it's very unlikely you're going to make that sale.  But winning it probably was to do more with luck and concentration than anything.  Luck, because everytime someone tried before me, it probably slightly changed the angle of the thing you had to knock off.  If I had tried at any point other than when I did it is highly likely that I wouldn't have won, or it would have taken me many more tries.  And as for concentration, each time I tried, I used what I had learnt in the previous goes as to where to aim etc - much like editing or learning another way to write a query letter.

The actual winning of Piglet was awesome.  I went completely hyper and insisted on thrusting poor Piglet in all my friends' faces (Okay, so poor them, but I think I'm forgiven).  I'm guessing that getting that call/email/letter is about a million times better, but it's the same type of emotion.

And then comes realisation.  Realisation that I'm not really into big teddies and don't really know what I'm going to do with my giant Piglet.  Realisation that my friend won a little Piglet in his nightwear and it's just so much cuter than my Piglet.  Which is, what I'm imagine, like realising that getting an agent/publishing contract means more work for you.  More editing, rewriting and writing another whole book.  And like realising that so-and-so over there has a much cuter cover than you/has a better contract than you etc.

But now I have a giant Piglet or you have a real intheflesh book it won't be enough.  Okay, so this is where my metaphor breaks down a little.  Because winning that Piglet is enough for me but it doesn't define me.  Publishing one book might be enough for you but usually one publishes because one loves to write (right?) so just because you have a book, doesn't mean you'll stop trying.  But the next time it might be a fail.  (I didn't win the giant Tigger that they replaced the Piglet with).  Or it might be even better (Imagine winning the whole set!).

Let me know what you think of my analogy (I would especially love to hear the views of any published writers).  And to finish off, here's another picture of my so-cute Piglet. 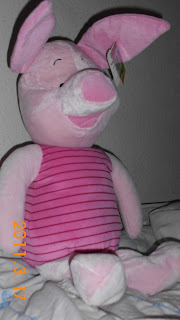 Email ThisBlogThis!Share to TwitterShare to FacebookShare to Pinterest
Labels: Thoughts on Writing

Oh! Fantastic analogy! I really enjoyed reading this, and I especially liked this line:

And then comes realisation. Realisation that I'm not really into big teddies and don't really know what I'm going to do with my giant Piglet.

I felt like that when I got my first traditional publishing contract. It has also turned out to be SO much work, but it's worth every step of the way. I also think a lot of luck goes into publishing and getting an agent, etc. It's a combination of luck, timing, talent, and tons and tons of hard work and patience. :)

Thanks for your comment Michelle - am glad it made some sort of sense. Obviously writing is WAY bigger than winning my Piglet - it's more work but the pay-off is bigger as well (at least I have to hope it is or else, what am I writing for? - I think that's a post for another day.)

Bethany, I love the analogy (and the Piglet!) I totally get what you're saying- I had a similar epiphany after an experience I had last year that I have wanted to blog about for ages but haven't gotten around to because of all my eye issues. Soon I hope.

It really is all about what we individually want, what we hope to accomplish and the emotions that go with them. I really think that there are writers out there who would still be unhappy if they had a shelf full of bestsellers.

The happy has to come from inside or no amount of validation will give it to you.

Thanks for taking the time to comment - and you've managed to sum up what I was trying to say so well! I completely agree that validation and happiness has to come from inside a person and if they don't have it, getting something won't make it magically appear.