As you can probably guess from the title, I have decided to start letting you all know which blogs I read and why I read them. I should mention right here and now, this will probably not be every Sunday, so don't be too crushed if it doesn't turn up in your blogger 'recent posts' one week.

Anyway, this week I am going to point you to Anna Re:Born this is a fairly new blog but Anna is no stranger to blogging and you can read her previous blog here.

I really enjoy this blog as it is usually quite well written and is interesting and quirky. Anna has a way of telling us about her life in one of the more interesting ways I've seen and is often updated - so I can get my blog fix almost every day.
Posted by Unknown at 12:57 No comments:

Email ThisBlogThis!Share to TwitterShare to FacebookShare to Pinterest
Labels: Thoughts on Other People's Stuff, Thoughts on The Blog-o-Verse

Self-Service Machines are What's Wrong with the World

Ok, so that title could be a little mis-leading. I take it back - self-service machines are only what's wrong with the world if you hold friendship and self-fulfillment (of any kind other than money) important. That is perhaps more accurate.

When doing my Christmas shopping (so thankful that that's over, now January sales time!) I noticed that more and more shops seem to be acquiring self-servicing machines; among them: boots, the post office and tesco (though to be fair, they've had them a while in my local tesco). I guess on the positive side, they may save some time - we don't have to queue quite as long, at least until the machine breaks or someone can't work out how to use it.

But on the negatives: they break; they lose jobs (only one person is needed to supervise however many self-servicing checkouts are available, as opposed to a person per till; they are supposedly simply yet I think I managed to put the wrong postage sticker on a few of my parcels; and, perhaps most importantly, they are yet another way for us to not communicate with other living, breathing people.

Now, I am not particularly a people person, there are many times when I just don't want to talk to anyone and the internet is great for that as you simply press the 'appear offline' button, but let's face it, communication (actual speaking and reacting to body language) is an important part of our lives. I don't think that losing it will benefit our society in any way, yet we still seem content to shunt human interaction further and further away. People need to socialise; it's in our genes; it's a survival instinct. If you don't believe me, lock yourself away for a week or two (no family, no friends except those you talk to through a computer) and you'll soon find yourself pining for interaction, not to mention the fact that you'll probably be bored out of your mind - there is a limit to how long you can play facebook games for!

Perhaps queueing for the till might take a little longer, but allowing yourself that time to slow down isn't a bad thing. And make sure you smile and thank whoever it is that serves you - they've probably had a long, hard day and just want to go home (but at least they have a job which they might not if everything was done electronically).
Posted by Unknown at 14:25 No comments:

Email ThisBlogThis!Share to TwitterShare to FacebookShare to Pinterest
Labels: Thoughts on Life, Thoughts on Stuff We Should Care About

Ok, so this is a question to all of you, my readers, and I'd really like it if you could leave your opinions, thanks.

Basically I'm considering starting another blog. Firstly, don't panic - this blog will still be here, full of my random observations and rants at the world. But this new blog... that will be about me. Yep, a blog for me to write all about myself (how egotistical can I be?) - what I do, what I eat, when I sleep - you get the gist. So my question is - does anyone actually want to read about my personal life (and if you do, why and what exactly would you want to know?). There's a possibility I'll start it anyway (I'm nosey enough to read other personal blogs so makes sense to put myself there as well - someone might want to know)

So please leave your thoughts in my comments, thanks.
Posted by Unknown at 10:48 1 comment:

It was Carrie's Birthday Bash 2 days ago. I have not been myself the last few days - overly busy followed by overly lazy and today when I finally got round to checking blogger, I was horrified to find that I had missed my first online party! But then I remembered...
that little thing called time travel. And so I am travelling back 2 days, but first I go back a few years to find my old prom dress: 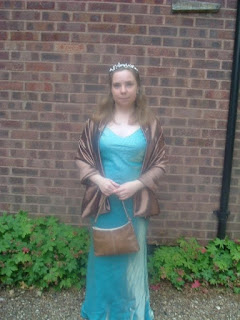 Obviously, travelling by time travel I don't need to worry about finding a mode of transport, instead, I just appear at the door (thought it better to appear outside rather than simply materialize in the middle of the room and give everyone heart attacks). It was a great day, and I thoroughly enjoyed meeting everyone and the food was good too!
Posted by Unknown at 05:07 1 comment:

When I was younger I always loved going to the Pantomime; it was our family tradition to get slightly dressed up for a night together at the theatre, laughing at the lame jokes and having to have Dad talk us into clapping and shouting out "He's behind you!" (secretly I always wanted to join in but would never admit it).

So this year, when my Scout group asked if I wanted to go with them, I jumped at the chance. In many aspects it was the same - the ritual handing out of sweets along the row (there were 6 members of my family so it really was a case of passing the sweets along); only the adults joining in; some terrible actors (and a few good ones) and the well-loved character of Buttons. Although, this time Buttons was played by Basil Brush (yes, you read that right) who materialised from a mini TARDIS and the songs were well-known and slightly irrelevant including You Are Not Alone (as a Michael Jackson fan for most of my life, I absolutely abhor the idea of other people singing his songs as they tend to butcher them) and Right Here, Right Now (I don't mind a bit of HSM but when the actors in the film sing it better, you know you have a problem).

Overall though, I thoroughly enjoyed the opportunity to revisit a childhood tradition (I still can't quite work out when it died out) and you never know, I may have made a new tradition for myself by going with the Scout group each year.
Posted by Unknown at 04:44 No comments:

Is it because I'm British?

Yesterday, I went for my lunch time Costa as I do every week (sometimes, 2 or 3 times a week - what can I say? It's my guilty pleasure). Anyway, I ordered my usual medium and they gave me a small. So I did the worst thing imaginable - I complained. Yes, I actually took it back up the till and said "I'm really sorry, but I ordered a medium." They took it and a few minutes later supplied me with the medium I had ordered (and paid for) but the look they gave me just made me want to shrink up inside myself. I'm sure they'll forget - they must see hundreds of people - but everytime I go there now, I know I'll be worrying that they will be remembering the time I complained. And the worst thing is I knew that I was totally in my right to do this - yet I am the one apologizing? What is going on here? Why do I feel so terrible about getting what I paid for? Is it really because I'm British; everyone is always saying how polite we are (we do stand in queues) but are we too polite? Let me know - I'm especially interested to hear from those who aren't British and your views, or are you British but have no problems sending food back (I know I can't do it)?
Posted by Unknown at 08:29 3 comments:

The people on Planet 51 are enjoying their 50's and many of them are becoming obsessed with the new film Humaniacs III. That is until a real Humaniac lands on their planet and madness ensues as they try to save themselves. Meanwhile, Chuck has landed on a planet that he expected to be uninhabited (afterall, humans are the only race, right) only to find himself unable to get back to Earth as the locals believe he wants to eat their brains. It is only with the help of Lem (the resident astronomer) that he will have any chance of evading the military.

The cheese (especially the music) and the cliches make this film what it is and I found that it made the film much more enjoyable and funny, despite sometimes being obvious. I highly recommend this to anyone with children or anyone looking to just relax and have a good time without anything remotely taxing on the mind.

Do you write letters? I don't mean emails and I don't mean texts or blogs. I mean real handwritten letters to friends. Personally I love writing letters almost as much as I love receiving them. Knowing that that person has taken the time to sit down and think about me enough to write to me when I get something through the post - it makes my day. But I have noticed that not many people recipricate my love of letters. I think most people see it as a waste of time and money - why buy a stamp when you can quickly type a few lines and it will be received almost instantly (in theory)? Everything in this world has to be so fast and immediate and I find I just can't keep up - everyone is running themselves into the ground and I worry that suddenly we will find ourselves in a pickle due to our lifestyles. So my suggestion? Take some time out and write to someone, anyone. It could be someone you see everyday or someone you haven't seen in years, or someone with an illness/disablility (PostPals is a good site for this). But take a few minutes out of your day to stop and think about someone else and show this with a handwritten letter - I guarantee you'll feel better.
Posted by Unknown at 08:17 2 comments:

Email ThisBlogThis!Share to TwitterShare to FacebookShare to Pinterest
Labels: Thoughts on Life, Thoughts on Writing 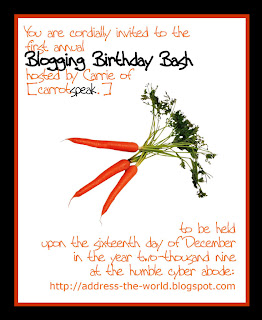 I am attending Carrie's first Blogging Birthday Bash here and everyone is invited. I'm so excited as this is the first time I'll have ever participated in any cyberspace event, I know my friend Kess is also attending, so feel free to come and join the fun.
Posted by Unknown at 16:09 2 comments: