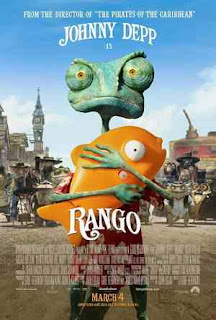 I didn’t really know what to expect of Rango – in large part due to all the advertising efforts only sharing the minimum information (more precisely letting us know that the voice of Rango is Johnny Depp and that Rango is some lizard/gecko/chameleon thing).  So, to clear up any confusion, the story is about Rango, a chameleon who thinks he’s an actor.  When he finds himself stranded in the middle of the desert, he realises he can become anyone whom he wants to be (and, incidentally, is when he becomes Rango).  When he is made the sheriff of the town of Dirt, however, he discovers that playing the part of a hero, and actually being a hero, are completely different things.
Personally, I found the plot unbelievably predictable, which meant I became bored relatively easily as the plot unfolded.  I found the beginning a little too graphic for my liking but there were a few moments throughout the film where it is impossible not to laugh.  By the end, however, I was just waiting for it to finish.
Overall, I was quite disappointed with the film and it isn’t something I would recommend going to the cinema for (though perhaps you could rent out the DVD when it is released), nor is it a film I expect to watch again.  In fact, the best part of this film is that there is no worry about it being in 3-D, as it is only available in 2-D (a fact that I don’t think makes any difference to the viewing quality other than not having to fork out a bigger fortune at the cinema).
Posted by Unknown at 08:53