I have just watched Harriet the Spy: Blog Wars. Of course, I am biased in loving the film starring Michelle Trachtenberg (1996 version), but have to admit that anything about Harriet Welsch always gets me in the mood for writing.  When I was younger I even had an A4 notebook marked 'Private' and went out to 'spy' on my neighbours, though I was never as impressive in my tactics as Michelle Tractenberg's Harriet, but she was my inspiration. 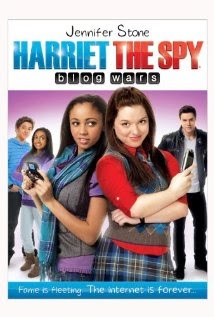 Harriet the Spy: Blog Wars includes many of the same characters (though I was deeply unimpressed with 'Golly') with similar attributes, but that's pretty much where the similarities of the films end.  Blog Wars is clearly an attempt to modernize a story that honestly doesn't need it; although in retrospect I will admit that many of the moments of the 1996 stretched the credibility (but I also have to admit that these moments were a large part of the attraction to the film).  I have to say that I went into the film quite cynical, and other than the character of Harriet Welsch I think I'll stand by that.  I was pleasantly surprised to enjoy Jennifer Stone's Harriet and found her to be an irritating teenage girl that struggles with the same problems in life as all other teenage girls.  In Blog Wars she is vying to write the class blog (as opposed to the newspaper) and when her first few posts aren't well-received she decides to 'stretch the truth' by writing about a famous actor whom she claims to know personally (when in actuality he is working with her father).  I have to say I was disappointed with the climax as it wasn't nearly as intense as the 1996 film, and honestly, it implies at the end that Harriet didn't learn her lesson.

Okay, so I wasn't planning on writing a mini-review, or even a comparison between the two films (as I said, I simply get inspired to write by Harriet Welsch), but apparently that's what you're getting today.
Posted by Unknown at 12:31

Email ThisBlogThis!Share to TwitterShare to FacebookShare to Pinterest
Labels: Thoughts on Professional Stuff (aka Reviews), Thoughts on Stuff No One Really Cares About