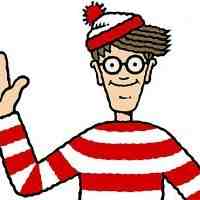 Yesterday I was looking at pajamas in La Senza.  The only ones that I remotely liked had 'Grumpy but Gorgeous' written across them but I already have ones that say that (they really need to think of a new phrase).  Anyway, there was one set that had a panda on the top which was kind of cute though I really don't know what was going on with the sleeves.  So that's what I said.  And then I noticed the trousers that went with it - red and white stripes - and continued "Besides, I don't want to be 'Where's Wally?'" Now I realise that this isn't exactly correct, but it got a laugh and I realised that I basically quipped a one-liner joke without even thinking.  I mean it fit easily into an episode of 'Friends' without anyone batting an eyelid.

So I have to ask myself: Am I naturally funny and have a chance at writing decent comedy?  Or do I just watch far too much television and it's starting to seep into me?

Of course I'm hoping it's the first but I have to say I have a sneaking suspicion that it's more to do with being able to quote almost every episode of 'Friends' without thinking.  So what do you think?  Would you have been impressed if you had heard me, or would you suggest I stay away from my D.V.D. collection for a while?
Posted by Unknown at 04:41

I would've giggled! Honestly, I think "innate talent" might be a portion of humor, but I think working to develop it is also a huge part. Like anything good, practice makes better, if never actually perfect!

LOL! I think I will say nothing as I do not want to get myself in trouble! Ha ha.

For me, I love reading you blog so you can write whatever you heart leads you to write!

I needed some humor today. Thank you! :-)

Deb - I completely agree with you that humour, like everything else needs hard work to develop into a skill. I have been working on my humour since last year when a few people suddenly told me that I was inherently funny (I assumed it was a compliment and decided to mine it for all it's worth).

Dominique - I'm glad you found what you needed and thank you for saying you love reading my blog, that means a lot to me.