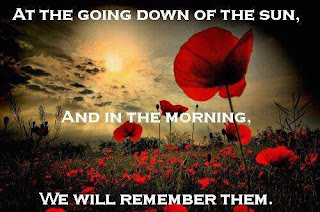 Last year I wrote about how war is just as devastating forthe other countries that fight, not just our own (particularly during the world wars) which was my reaction to the Padre at the Remembrance Sunday Parade Service. This year, my thoughts are once again a reaction to his sermon.

Mostly he talked about how we should honour and appreciate soldiers – those who’ve fought and those who are fighting right now. It seemed very important for him to tell us how noble they are, how they have chosen the right profession, how we should give ourselves to the service of peace in the same way.

I agree with the last part to a degree – I believe everyone should be aiming for peace in the world, though not through becoming soldiers (though if that’s what you believe is right for you then that’s up to you). For me that is little things like sharing love and hope and smiles (mainly through snail mail), but also things like signing petitions I believe in and, when I have something I feel is important to say, sharing it online.

I also agree we should honour those who have fought for our peace, despite the fact peace has never fully been realised (we can all live in hope).  But there is a fine line between honouring those who have died and suffered through war, and glorifying them and the act of war itself.  That is why I am a big believer in Remembrance Day – I think it’s important to remember how millions of lives were lost in the first and second world wars, as well as the losses people still suffer due to war. It’s important to remember and teach young people because it should never have happened but, maybe if we learn from it, nothing as bad as that will ever happen again (got to be honest, I don’t believe we as a species will manage that though). But I don’t think it should ever be held up to be a good thing. Pointless suffering and death, especially in those numbers, can never be seen as a good thing; it is actually one of the few times I will say the end does not justify the means (okay, if war had ever created worldwide peace and acceptance I might feel differently, but the truth is it hasn’t).

So I wear my poppy to remember, and to remind others of, the atrocities of our past; and not to uphold war as something to be impressed by, or even supported. I am no longer naive enough to believe we will ever not have war, but I live in hope we might find other ways of creating peace.

How do you try and share peace in your daily life?