Sex And The City 2 Review 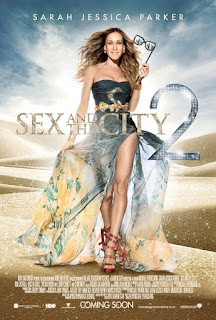 It was with a little trepidation that I walked into the cinema with my best friend.  The things we had heard - iPhone ad, no plot, etc - were a little worrying but as Sex And The City fans we couldn't very well not go.  As it is, I am so glad I went and will definitely be buying it on DVD when it comes out.  OK, so there was one line about an iPhone that jarred, and there were a few too many famous people (Liza Minneli - though you can't say she can't sing, Miley Cyrus - who does nothing but stand there, Penelope Cruz - who's an extra?) but overall those things didn't really ruin the film.

Now, you probably want to know why it was good and why I'm going to be raving for a few weeks about it.  Because, in my opinion, it was way better than the first film and there is every chance that I will see it again while it's still in cinemas.  It was better than the first film simply because the first one depressed the crap out of me.  It ruined the ending of the series and it makes me want to curl up in a ball and eat ice cream.  This film did non of the above.  It made the cinema laugh out loud and I even heard some clapping going on at certain lines.  That to me means it's a hit.  Everyone loves to laugh and that's why we're there - to be entertained.

Entertainment isn't all this film offers.  It looks into the customs of cultures/places (Abu Dhabi in the Middle East to be specific) where women are still considered inferior and for the first time I truly felt appreciation for the fact that I can wear what I like, I can kiss who I like, where I like and no one will bat an eyelid.  I will admit that even for SATC the feminist issues were a little in your face but when the women surrounding the four main characters are covered head-to-toe it would have been hard not to have been.

I won't be surprised if no man ever wants to see this film (though it is probably the most male-friendly 'episode' of SATC) and ladies, DON'T force your men to go with you, seriously, it's really not a good idea, but for every woman I would say this is a definite hit.  Yes, even YOU (Cassie and Kelly - that it includes you!)  I give this film a huge thumbs up.
Posted by Unknown at 16:15

Email ThisBlogThis!Share to TwitterShare to FacebookShare to Pinterest
Labels: Thoughts on Life, Thoughts on Professional Stuff (aka Reviews)